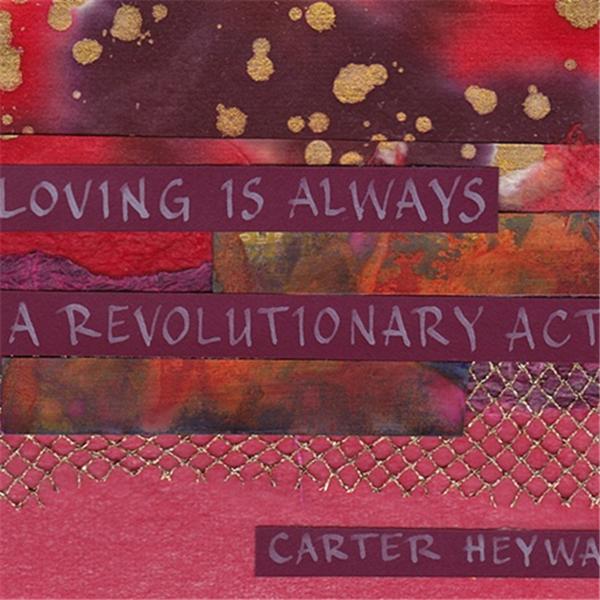 “Jesus of Nazareth was a free man in his own life, who attracted followers and created enemies according to the dynamics of personality and in a manner comparable to the effect of other liberated persons in history upon people about them. He died as a result of the threat that such a free man poses for insecure and bound men. His disciples were left no less insecure and frightened. Two days later, Peter, and then other disciples, had an experience of which Jesus was the sense-content.

They experienced a discernment situation in which Jesus the free man whom they had known, themselves, and indeed the whole world, were seen in a quite new way. From that moment the disciples began to possess something of the freedom of Jesus. His freedom began to be “contagious.”

It could also be expressed by saying, “For freedom Christ has set us free.”

Paul M. van Buren, The Secular Meaning of the Gospel.

That something intensely earth-shaking occurred to the followers of Jesus after his crucifixion is clearly obvious to me. What happened and what it means today is a work-in-progress for me.

I used to be a literal bodily resurrection believer, most of my life, actually. From before I can remember, I accepted unquestioningly the biblical narrative. That lasted until I was in my mid-30s, relatively late compared to many other deconversion experiences. So, I have decades of faith to draw on, as well as over two decades of a more skeptical consideration.

One can view the world in more than one modality, for example the “scientific-logical” which focuses on the facts and empirical investigation. Or one can use a more “relational-experiential” approach that focuses on feelings, motivations, and interconnections.

The biblical emphasis is on “faith/believing” in a deeply relational sense that is not not brutely logical. This kind of Faith is about love and the richer, deeper knowing that comes from loving others intentionally and immersing the “facts” about those one seeks to love within a positive, caring intention.

I wrote the following poem about the resurrection a few years ago.

It was a promise

The poor would be given a revolutionary society

The hungry would be given a satisfying provision

The suffering would be joyful

It was an execution

The persecutors lynched a leader

It was a subjugation

The poor were scattered in their fear

The hungry driven to renewed desperation

The suffering cast into shattering sadness

The persecuted were utterly defeated

From within this hopelessness, came a vision

From within destruction, came a power

From within death itself, came an aliveness

It was a reconstitution

The poor envisioned a revolution

It will be a transformation

The poor will be poor no more

The hungry will be hungry no more

The suffering will suffer no more

The persecuted will be vindicated

It will only take time

I look at the resurrection within a theo-political framing that centers the revolutionary liberation of humanity that pulses in the heart of the teaching of Jesus, esp. Luke 6:20-26.

20And he, raising his eyes to his disciples, said: “How blissful the destitute, for yours is the Kingdom of God; 21How blissful those who are now hungry, for you shall feast; how blissful those now weeping, for you shall laugh; 22How blissful you when men hate you and when they exclude you and reproach you and reject your name as something wicked, for the Son of Man’s sake: 23On that day, rejoice and leap about; for look: Your reward in Heaven is great; for their fathers accordingly did the same things to the prophets. 24“But alas for you who are rich, for you have your comfort. Alas for you who are now replete, for you will be hungry. 25Alas for those now laughing, for you will mourn and lament. 26Alas for you when all men speak well of you, for in like fashion their fathers did the same things to the false prophets.

This is the ethical, compassionate core of the gospel.

Not miracles. Jesus himself warned against relying on “signs and wonders.”

And yet, relationally, miracles occur within us and among us.

The followers of Jesus moved from the Traumatic Passover Execution to Enthusiastic Pentecostal Communism with history-shaking power.

As I read the history of Christianity, I’m by turns appalled and inspired. As I sort out the differences, it is when the followers of Jesus aim at world-shaking compassion versus aiming at doctrinal certainty that I fall in love with the Ekklesia being made real by the Divine Pneuma/Breath/Life-Force.

So, yes, I reason at a scientific-logical level that the executed physical body of Jesus ended up in “hell” as he “descended.” The deadly crucifixion must be as awful as possible to break our hearts in solidarity with the billions of evil unjust deaths that satanic principalities have visited on the oppressed.

And, the relational-experiential transformative resurrection miracle is that some followers of Jesus began a journey towards radical, revolutionary compassion, inspired to believe that this crucifixion was not the last word, but only the beginning of a new possibility of aliveness.